Thank you to The Advocate for this fantastic article about the Smithsonian Channel documentary, “Was The General A Woman?”, which reveals that General Casimir Pulaski was intersex! Thank you also for the fantastic interview– it actually managed to get in all my main points about the implications of this fantastic news. (Quotes included here below.)

I hadn’t watched the documentary before my interview, so I didn’t know that it also gives focus to the fact that Pulaski was a Polish immigrant who came here seeking freedom–a wonderful pro-immigrant sentiment and reminder that other than Native “American” folks (quotes because they were here before it was America), this has always been a nation of immigrants and they should be welcomed and celebrated today.

“[Doctors] often insist that babies born like Pulaski are female and recommend cutting their genitals and pumping their bodies with unnecessary hormones to create this femaleness — a practice which would have stolen General Pulaski from America as well as himself!”

Pulaski’s life is further evidence that the trans military ban is a grossly misguided policy that not only robs American citizens from the opportunity to serve, but also robs our country of great soldiers,” Viloria shared.  “Under the current ban, Pulaski’s XX chromosomes would deem him female, which would have excluded him from the military altogether in his own lifetime, and today would allow him to serve only if he were living as a legal female, which we can imagine he might not be, as he was obviously a man.”

“I wish that more people knew that being intersex can be an extraordinarily positive physical, spiritual, and intellectual experience, as it has been for me, when you allow intersex individuals to make our own decisions about our sex traits and our gender identity.” 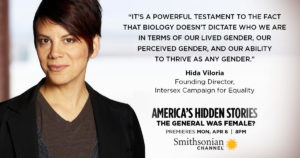