Big thanks to The Daily Beast for publishing my latest essay, “Fear of Flying–or at least the TSA–while intersex.” 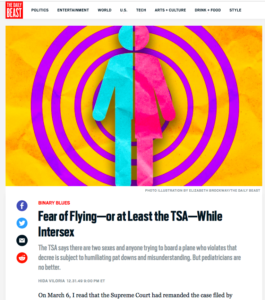 On March 6, I read that the Supreme Court had remanded the case filed by Gavin Grimm—the 17-year-old transgender student who’s fighting to use the same restroom as the other boys at his school—sending it back to be reconsidered by a lower court. The Trump administration rescinded critical guidance that clarified Title IX’s sex discrimination protections applied to transgender individuals. The argument against trans inclusion in Title IX is usually made along biological lines, citing that there are XY males and XX females, and being transgender is not a “sex” by definition.

Similarly, a few weeks earlier, I came across an article using biological determinism titled “You are Born a Girl or a Boy, Period.” It caught my eye because I was born neither. People like me have existed since the dawn of humanity, and most of us prefer the label “intersex,” target=”_blank”>intersex” which encompasses all the variations of sex characteristics—including variations in chromosomes or gonads which are invisible to the eye, as well as visible genital variance—that humans can have. This article wasn’t about intersex, though, as I had expected.

Rather, it was about trans people and, more specifically, the position statement “Gender Ideology Harms Children,” which was released this past January by the American College of Pediatricians (ACPEDS). This statement asserts that “conditioning children into believing a lifetime of chemical and surgical impersonation of the opposite sex is normal and healthful is child abuse.” I could go on about the many offensive and unsubstantiated statements I read in the article, but what I found most noteworthy was that it denies the existence of intersex people in order to depict trans people as psychologically disordered. The vice president of ACPEDS, Dr. Quentin Van Meter, was quoted saying, “You are either born a girl or boy, period. This transgender concept is simply a social and cultural feeling.” He also said in an audio interview that’s linked to in the article, “We are binary as a human population; we are male or we are female.”

I found these statements odd because Dr. Van Meter is a pediatric endocrinologist, and as anyone in his field should know, some people are born intersex. Because we make up 1.7% of the population, you could say we’re as common as redheads, and despite the blonde/brunette hair color binary, no one is denying their existence. So why would this doctor feel the need to deny intersex people’s existence while discussing trans people?

As I later learned from reading the article, the ACPEDS statement says that being trans is a “recognized mental disorder in the most recent edition of the Diagnostic and Statistical Manual of the American Psychiatric Association.” Ah-ha. It stands to reason the ACPEDS wouldn’t want to acknowledge that biological sex is not binary, as this could be seen to support the notion that trans people’s existence is natural—a notion that was recently explored in the National Geographic documentary Gender Revolution, which explained what intersex means and then explored how, similarly, there may be a biological component to being trans, caused by factors impacting the brain in utero.

Although Dr. Van Meter did eventually address intersex people in the article, he did so by saying, “The exceedingly rare disorders of sex development (DSDs)…are all medically identifiable deviations from the sexual binary norm, and are rightly recognized as disorders of human design.” Apparently, according to the ACPEDS, if you’re born other than a girl or a boy, or if your gender identity is uncommon, you have a disorder. I can’t help but wonder how they think children benefit from being portrayed this way—in a no-win situation where they’re deemed inferior whether their gender variance is psychological, physical, or both.

Dr. Van Meter also asserted this: “Individuals with DSDs do not constitute a third sex.” When I read this, I immediately thought that I would love for him to explain to me why, then, I get stopped when I travel because the full-body scanners used by the Transportation Security Administration (TSA) don’t recognize my body as either male or female. As the TSA’s website states, “When you enter the imaging portal, the TSA officer presses a button designating a gender (male/female) based on how you present yourself. The machine has software that looks at the anatomy of men and women differently. If there is an alarm, TSA officers are trained to clear the alarm…”

This process creates problems not just for intersex people with genital variance (or “ambiguous genitalia”) like me, but also, sometimes, for trans people. If trans people have not had gender conforming surgery, or if they have but are mislabeled by TSA agents as their sex assigned at birth, then their genitals, too, sound an alarm. As Shadi Petosky, a transwoman who sued the TSA, told the New York Times, “I’m in trouble if they push a button that doesn’t fit.”

I can empathize because I’m in trouble no matter which button agents push because the machines only “approve” male or female anatomy unlike mine. Additionally, while TSA regulations address transgender people, the word “intersex” isn’t mentioned in them. This results in situations like one I discuss in my memoir Born Both (Hachette Books; March 14, 2017), when a TSA supervisor once rudely told my partner while I was stopped in the security line that “when there’s an anomaly we must check the threat.”

Many, even some intersex people, dislike the concept of a “third sex,” because to say there are only three sexes is somewhat erroneous given that there’s a wide range in what we call “biological sex,” even among intersex people. Whatever you want to call us, though, we’re all born something other than the two commonly acknowledged sexes. And if we’re born with genital variance that wasn’t surgically “normalized” when we were babies or children (a human rights violation which all intersex people advocate against), the TSA registers it and doesn’t “approve” us as males or females.

This is why, just last month, I found myself sitting on an airplane, dazed and on the verge of tears after feeling violated by a TSA agent. The TSA has been stopping me and “inspecting” my genitals since 2011, when full-body scanners were introduced, and until now I had usually brushed those experiences off. But being the target of discrimination doesn’t always get easier.

My mistake this last time, apparently, was saying to the agent—with a friendly smile, mind you—that this always happens to me and I realized she had to pat me down. Instead of defusing the situation, though, my comment seemed to set off a suspicion in her. She proceeded to slowly explain why she had to check me. When I politely mentioned that she didn’t need to explain, and to please go right ahead as my flight was boarding soon, she stared at me coldly and called her supervisor over.

Then, with the supervisor watching, she began reiterating why I had to be patted down, running her hands all over my private parts as she was doing so. The fact that she fixed a cruel stare upon me while she did is what made this experience feel, for the first time, violating. It sent me into the disassociated space I was still in an hour later, my heart racing and my body slightly shaking. All because the TSA has yet to acknowledge us.

A few days after my upsetting incident, I found my reality echoed in the words of trans actress Laverne Cox. While appearing on The Late Show with Stephen Colbert, she stated, “Bathroom bills are not really about bathrooms, they’re about whether trans people have the right to exist in public spaces.… I exist. I have a right to exist in public spaces.”

I agree. Both trans and intersex people have a right to exist in public spaces, but there is an ongoing effort by medical, government, and other institutions to discourage or limit our ability to do so. I am routinely stopped and made to undergo physical examinations at airports simply because my sex is different than the available categories of male or female. It’s made flying an anxiety-provoking drag, to say the least.

What I’ve been left wondering is: What is all the fear about? Trans, intersex, and gender non-conforming people are just a variation on a human theme, like people with green eyes or red hair. I’ll even add that because, in our case, the theme is gender, we may actually have some valuable insights about gender to share with the rest of the world. No matter what folks think of us, though, we won’t stop standing up and speaking out for what we know is right—and we won’t hide. In fact, I’m getting on another flight later this month. Wish me luck!