It’s hard to believe it’s been three years today since I spoke at the UN: one of the most fulfilling, moving moments of my life. It happened for the UN’s Human Rights Day 2013 event Sports Comes Out Against Homophobia, which I was invited to participate in to speak on discrimination against intersex female athletes and the need for intersex human rights. Among other things, I was able to make the following statement (quoted in an article about the event) below:

“It’s very easy to discriminate against intersex women [athletes] because we’re closeted,” said U.S. intersex activist Hida Viloria. “That’s why even though intesex is 1.7% of the population, as common as having red hair, you don’t all know that you know an intersex person.”

Joining me on the panel, moderated by amazing “out” journalist Thomas Roberts, were “out” sports legends Martina Navratilova and Jason Collins, and two fantastic human rights activists, Thandeka Mkhuma of South Africa, and Anastasia Smirnov of Russia. See pix below. 🙂 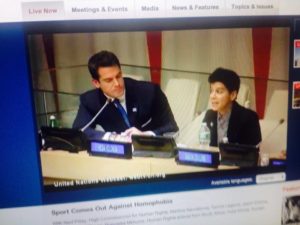 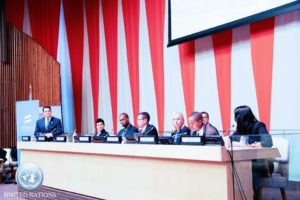 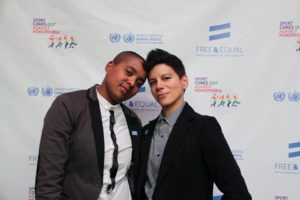 It was a beautiful event and opportunity to educate my esteemed panelists, world leaders and others about the discrimination that intersex people face and the need for intersex equality. I feel blessed and humbled to have been involved. The UN’s fantastic Free & Equal Campaign even made a 4 minute video about it, which you can watch below, featuring yours truly. I also feel blessed and grateful to see all the work and achievements by my fellow intersex activists and our allies for intersex human rights since I gave this presentation. 🙂