“The future is no sex.” — Grace Jones

Countless people, including myself, have been deeply saddened by the loss of icons David Bowie and Prince this year. In my case, I also kicked myself, while grieving, for having never sent a message of gratitude to either one. God/dess knows if they’d ever have gotten it, but I’d really wanted to tell them, in case they did, what a positive impact they had on my life.

So today, I want to thank, and to celebrate the life, of the third icon that came to mind each time I mourned the passing of the others, by saying: Happy Birthday Grace Jones — thank you for being born and for being you! You saved my life in high school, and were a source of inspiration for me to love myself in the years that followed.

While “saved my life” may sound extreme to some, it’s not when you consider that I was a closeted, gender fluid, Latinx (Latinos with non-binary gender identities), intersex, queer, attending Catholic high school in the ‘80’s – with parents that were even less accepting than the homophobic, transphobic community around me. Boy, did I need something, or someone, to tell me it was okay to be who I am! Thankfully, the universe answered my prayers, in the form of Bowie, Prince, and Grace Jones – what I think of loosely as the Holy Genderqueer Triad. They were my role models as someone who didn’t feel 100% girl or boy, but more of a combination of the two. Of the three of them, Grace spoke most directly to my experience. 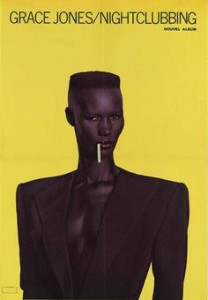 Living, as I was, in an extremely racist, sexist, and homophobic home and community, seeing someone who boldly rejected these dynamics, shining confidently and beautifully in who they are, and in all their talent, was inspirationally life altering for me. Grace seemed to laugh in the face of racism, sexism, and homophobia, showing off all the aspects of herself that were dark, masculine and “unwomanly”, while also, simultaneously, embracing traditionally feminine modes of gender expression.

The result was someone unlike anyone I’d ever seen: legally a woman of color, yet one who seemed to feel like both a man and/or a woman. She confirmed this in a 1984 interview in Interview magazine, saying things I’d never heard uttered before. 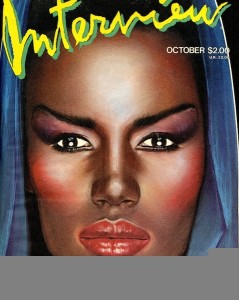 TALLEY: There are people who say to me, “Grace Jones, she’s not a real woman, she’s a man, a drag queen.” How do you feel about that?

JONES: I don’t care. I like dressing like a guy. I love it. When I was modeling I used to do pictures where I would dress up like my little brother. No makeup and I looked like a boy.

JONES: Very passé. The future is no sex.

TALLEY: You can change your personality.

JONES: You can be a boy, a girl, whatever you want. I have a lot of man in me.

TALLEY:  And you have a lot of woman in you too, darling.

JONES: I have just as much woman in me as I have man. It’s just a matter of channeling the energy into which way you use it.

Shortly afterwards, in another magazine interview, Grace was quoted saying, “I am both man and woman” (sorry, I can’t find the source, and don’t want to delay getting this out on Grace’s birthday). 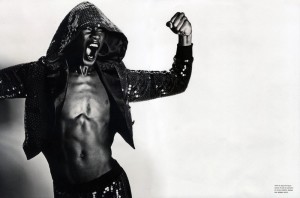 I wasn’t sure if she was referring to something physical, and I assumed that she probably wasn’t, but it didn’t matter. I had just started to realize how androgynous my body’s sex characteristics are, and I’ll never forget the value of seeing those words on the page.

Whether Grace meant that she was both a man and a woman in her mind, or in her body as well as her mind, like me, the statement made me feel that I wasn’t alone in the universe. In fact, coming from her, it made me feel like I was in very good company.

A decade later, in the mid-1990’s, I became one of a handful of people to begin speaking out publicly on television, radio and film about being intersex, and I know I would never have been able to do it if Grace and Prince hadn’t paved the way as brave, gender nonconforming people of color. Obviously, my journey and my relationship with my gender identity are my own, but it’s always easier to be something that you are familiar with, or, in this case, that you have witnessed at least once.

While Grace and her statements weren’t the first thing thing that came to mind when I realized that I’m a genderqueer, intersex person, it would be remiss of me not to point out that they inevitably informed and made it easier for me to be who I am, simply by virtue of having been a part of media-covered, mainstream consciousness.

The term “genderqueer”, and the genderqueer community, didn’t exist yet when I came out as non-binary intersex person, so hearing Grace proclaim that she was both a man and a woman, and Prince proclaim that he was neither (in his lyrics., “I’m not a woman, I’m not a man, I am something that you’ll never understand”, from “I Would Die 4 U”), were the only mirrors I had to being the genderqueer herm that I am. And speaking of similarities, I just noticed that Grace even rocked the same topless suspender look that I used to love to do. 🙂

Whether you know it or feel it or not Grace Jones, you are a genderqueer pioneer. So Happy Birthday, from me and the countless others whose lives you’ve made better! Thank you for showing me that I could be myself by having the guts to be your awesomely original self. And thank you for the incredible music, performances and persona that you’ve shared with us over the years, and for kicking ass for so long — I can’t wait to read your memoir, and to see you perform onstage in Berkeley this August, and am wildly impressed that you’re still doing it!

I hope you’ve had exactly the birthday that you want. Even though I should be working on my manuscript edits right now (and btw, the title is Born Both ), I just couldn’t let another day, especially today, go by without sharing with you, and the world, what a pioneering, badass, super hero/heroine you’ve been to me! What’s more, in your honor, I’m going to watch the video for “Pull Up to the Bumper”. It’s not only fun and funky as hell, but it reminds me of the time period when I was an at-risk, suicidal kid in Queens, New York, and you made all the difference. <3