I was SO happy to hear the news last week about NYC’s intersex birth certificate—from the fantastic Sara Kelly Keenan, the person who’s been issued the historic certificate– and to share it, and today I’m thrilled to be quoted about the development in People magazine! From the article, “Advocates Say Issuing Nation’s First Intersex Birth Certificate Is ‘Critical to Ending intersex Oppression”:

Hida Viloria, chairperson of the Organisation Intersex International, notes that Keegan’s historic intersex birth certificate comes on the heels of another victory for the intersex community: in November, a judge ruled in favor of allowing OII’s associate director Dana Zzyym to be issued a passport despite not identifying as male or female.

“Intersex people have suffered for centuries because of the notion that only males and females exist, which is why our associate director Dana Zzyym successfully fought for federal gender recognition as intersex on their passport last year,” Hida Viloria, chairperson of the Organisation Intersex International tells PEOPLE.

“Having intersex acknowledged as a legal sex/gender category is critical to ending intersex oppression, such as the barbaric nonconsensual medical practices which attempt to render us all males or females,” Viloria continues. “We commend Keegan and Zzyym, and note that until equal services and protections are available to all intersex citizens, this designation should remain a voluntary one only, for adults who seek it.”

Big thanks to People Magazine for their great coverage of this timely and important historic event! 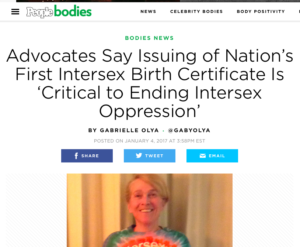