My latest, “Stop trying to make Caster Semenya fit a narrow idea of womanhood. It’s unscientific and unethical,” in The Washington Post, explores the May 1, 2019 ruling by the Court of Arbitration for Sport (CAS) in the case of black South African track star Caster Semenya. I discuss twelve different reasons why the ruling–which upheld the latest IAAF policy for women athletes with naturally high testosterone (hyperandrogenism)–is scientifically flawed and unethical. Enjoy.

Word count prevented a more in depth (or conveniently numbered :)) exploration, so I’ve done it below (substantiating hyperlinks included in the original, no time to add here–yet!). Please share to support women with variations in sex characteristics competing with their beautiful, natural gifts intact. To be clear–since I didn’t say it explicitly in WaPo because: know your audience–what sporting bodies are doing to Caster is sickeningly unconscionable and corrupt. To say that something is “discriminatory” but that such discrimination is “necessary”–as the CAS ruling did about the IAAF policy forcing Semenya to take unnecessary drugs if she wants to compete as a woman–signals an open abandonment of ethics and human decency which I think should concern everyone.

Here’s twelve serious flaws with the IAAF’s policy for women like Caster which inform why many of us think it’s gotta go:

1. Naturally occurring testosterone operates differently from fake forms such as steroids, and studies on natural testosterone’s impact show that there is <em>no scientific evidence that it confers an advantage.

2. The fact that women with CAIS have frequently become elite athletes despite having 0% functional testosterone–as opposed to all other women who have some levels of functional T–is further evidence that the testosterone theory used to justify the IAAF’s policy is scientifically unsound and inaccurate.

3. The case of Indian runner Dutee Chand is further evidence that natural T does not confer advantage. Chand was banned under the 2011 policy–which set the T limit at 10 nanoliters per liter. Dutee fought the ruling in the CAS and won, has always run without reducing her high T levels, and yet has never dominated track and field, placing 30th and 40th in her respective events, the 100m and 300m.

4.  Due to a lack of scientific evidence to support their 2011 policy against women with high T, the IAAF commissioned a study, published in 2017, which has been highly criticized by experts for containing faulty data.

Further, as it didn’t make the cut: The IAAF’s commissioned study was written by members of the IAAF’s own medical staff, Dr. Stephane Bermon and Dr. Pierre-Yves Garnier.

5. Similarly to Dutee Chand, Semenya runs nowhere near men’s times, as her critics insinuate, but solidly within women’s speed ranges [placing only 4th on the list for the world record in a recent race].

6. The IAAF’s latest policy specification to women running only in the 400m-mile events is scientifically unsound, as experts agree that testosterone has more impact in power events, such as shot put and javelin.

7. The IAAF’s proposed policy has been criticized as directly targeting Semenya, as it applies only to women w high T (above 5 nanomoles per liter) competing in her events, the 400 meters to a mile. Chand, for example, was banned under the 2011 policy—which applied to women with over 10 nanomoles per liter, twice the amount of the current policy’s limit—but is eligible under the latest policy because she runs the 100m and 300m events.

8. The IAAF chose to revive the testosterone policy after Chand’s case overturned it in 2015, in response to British runner Lynsey Sharp and other white female athletes’ highly publicized complaints, at the 2016 Olympics, that it was unfair that they had to compete against Semenya.

9. Both Dutee Chand and Caster Sememya have high T levels, but the CAS ruled Dutee Chand can compete without taking hormones,while subsequently, that Caster can not. Thus the factors which distinguish them, and enable a different ruling in Semenya’s case, are social, not scientific; they are: racism (Semenya is black), sexism/gender non-conforming-phobia (Semenya is gender non-conforming/has a “butch” gender expression) and homophobia (Semenya publicly married her wife).

10. The IAAF, IOC and now, CAS, are creating a situation wherein women who escaped medical practices performed on babies and minors with variations in sex characteristics–a practice widely denounced as a harmful human rights violation–are now pressured to undergo such practices as adults or risk their very livelihood. This is a human rights abuse, denounced by the UN.

11. The new IAAF policy targets women of color from the global south because they come from poor regions of the global south where medically unnecessary “normalizing” cosmetic medical treatments which infants and minors born with variations in sex characteristics (VSC) are often subjected to in the first world—a practice widely denounced as a human rights violation—are not available.

12. The IAAF and IOC have implemented polices against intersex women athletes since 1950, but they’ve been overturned because of ethical concerns and the fact that the science does not support them.

13. The IAAF and IOC ignored the scientific findings presented to them when drafting the first regulations for women with high T–in 2011 in direct response to Semenya–in order to appease complaints by white female athletes.

We share the information here, outlined in the text below: 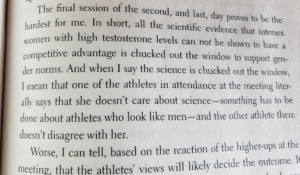 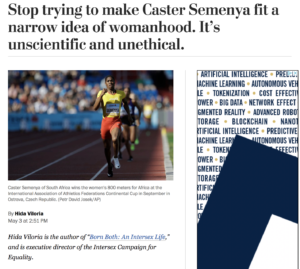 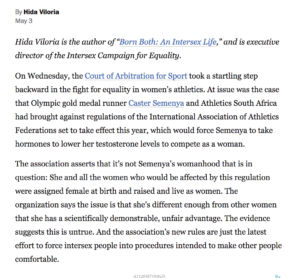 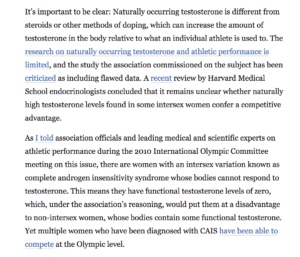 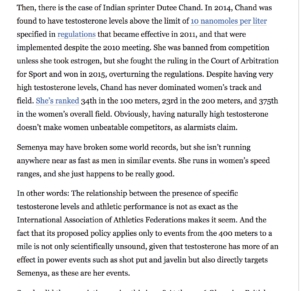 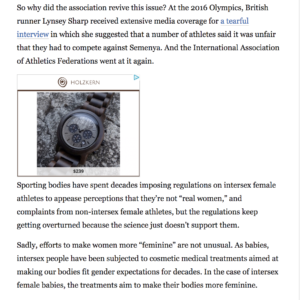 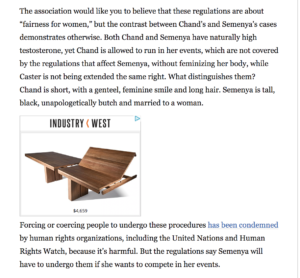