I was touched to see and hear that so many people contacted National Geographic on behalf of the intersex community in response to the sad news I posted about last Friday on FB, as well on here and twitter, about the magazine defining being intersex as a “disorder” <3.

Today, I want to share some good news: TOGETHER WE FIXED IT! I received word not too long ago from theIr editors that National Geographic has revised the definition of intersex in the online issue “Gender Revolution” to one that does not pathologize us! Hurray!

Although they didn’t revise the definition to the one that several prominent activists, including myself, suggested, it’s fantastic news! We suggested they use the definition found in the fantastic UN Intersex Fact Sheet (which I’m honored to say I helped draft): “Intersex people are born with sex characteristics (including genitals, gonads and chromosome patterns) that do not fit typical binary notions of male and female bodies”. They used a similar version, found here, which is fantastic in that it does not define being intersex as a disorder. It does however include, unnecessarily imho, a statement about the term “hermaphrodite” being “outdated and offensive”. This is not true as I know many people that use and actually prefer that label, or my favorite, its shortened version: “herm”. Personally, I never disliked the word, and love that almost everyone is familiar with it and that it clearly depicts that we are talking about a natural variation of sex rather than other issues. I also miss the days when people in the intersex movement I first joined used to proudly and defiantly call themselves “hermaphrodites with attitude” (see pic below), and am glad that there are still proud herms out there despite the fact that some have tried to put our original label on the sh** list. 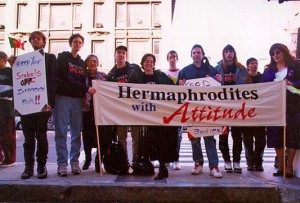 I was also informed that National Geographic stopped running corrections in their print issues years ago for space reasons, but that they will be running a correction referencing the original print issue definition in their next online issue. This is wonderful, wonderful news, and I want to say THANK YOU SO MUCH to everyone who spread awareness about this, especially those who contacted National Geographic​, as well as to National Geographic and their editors, for telling the world that intersex people are beautiful, EQUAL human beings like everybody else. 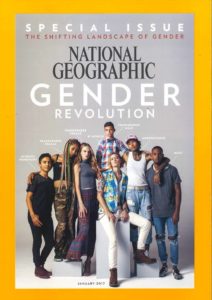